UBS's Farm-to-Table business model included encouraging the Employee Retirement System ("ERS") and other entities in Puerto Rico to issue bonds when no viable market except for UBS's leveraged closed end funds existed on the Island, on the mainland or globally. UBS's control of $9 billion of portfolio holdings in leveraged closed end funds it had already sold into its retail customers' accounts allowed UBS to unload newly issued bonds and reap substantial underwritings fees. UBS's conflicted underwritings and the investor harm which predictably followed never would have occurred if the funds had been registered under the 1940 Investment Company Act or if UBS Financial Services of Puerto Rico ("UBS PR") had not disregarded its most basic duty of loyalty.

We illustrated the dramatic change in UBS's closed end funds' holdings in 2008 as UBS served as the lead underwriter on the ERS Pension Funding Bonds in 2008 in "UBS Succumbed to Conflicts and Purchased $1.7 Billion of Employee Retirement System Bonds into its Puerto Rican Municipal bond Funds in 2008" (available in Spanish).

UBS Puerto Rico's Underwriting of COFINA 2008A Bonds Was Shocking 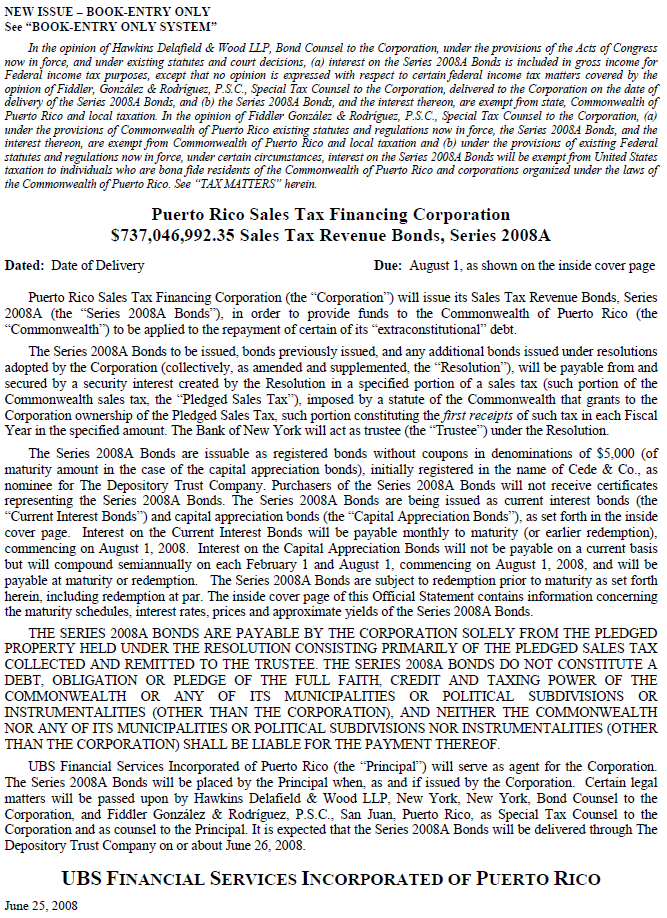 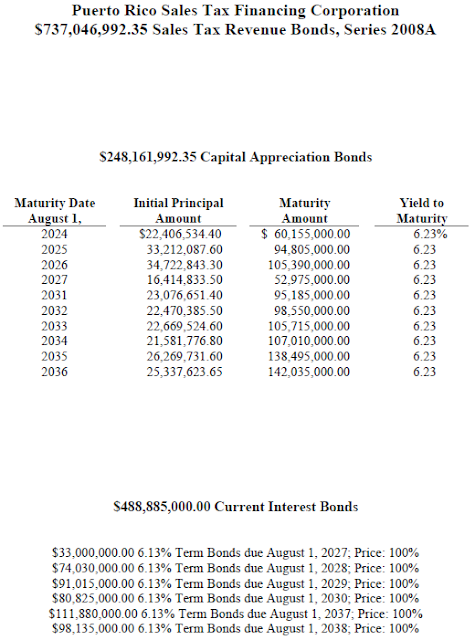 The COFINA 2008A bond deal provides a clearer indication of UBS Puerto Rico's conflicted conduct than the three 2008 ERS underwritings because UBS PR was the sole underwriter of the COFINA 2008A offering. In Figure 3, we report the shocking fact that UBS bought 100% of this $737 million offering into the UBS PR closed end funds. There was literally no market for these UBS bonds other than the portfolios controlled by UBS PR, held in retail accounts at UBS PR. 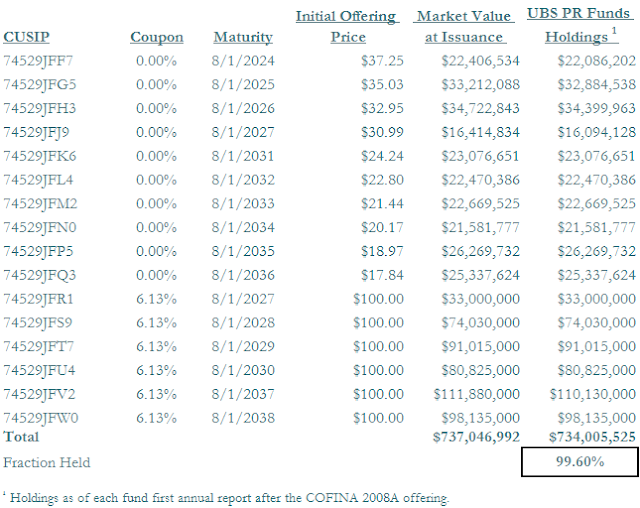 Worse than that, the TFPRTMF had no COFINA bonds until the 2007B offering UBS also underwrote and then held $275 million of the 2008A issue and $20 million from the 2007B offering in its $566 million portfolio. Thus, in just 12 months UBS converted this fund from 0% to over 100% of the net asset value invested in COFINA bonds, solely because UBS needed a place to put the unmarketable bonds it was underwriting. See Figure 5.

UBS Financial Services of Puerto Rico was the lead underwriter for the $1.333 billion COFINA 2007B bond offering, dated July 17, 2007. See Figure 6. The Official Statement is available one. 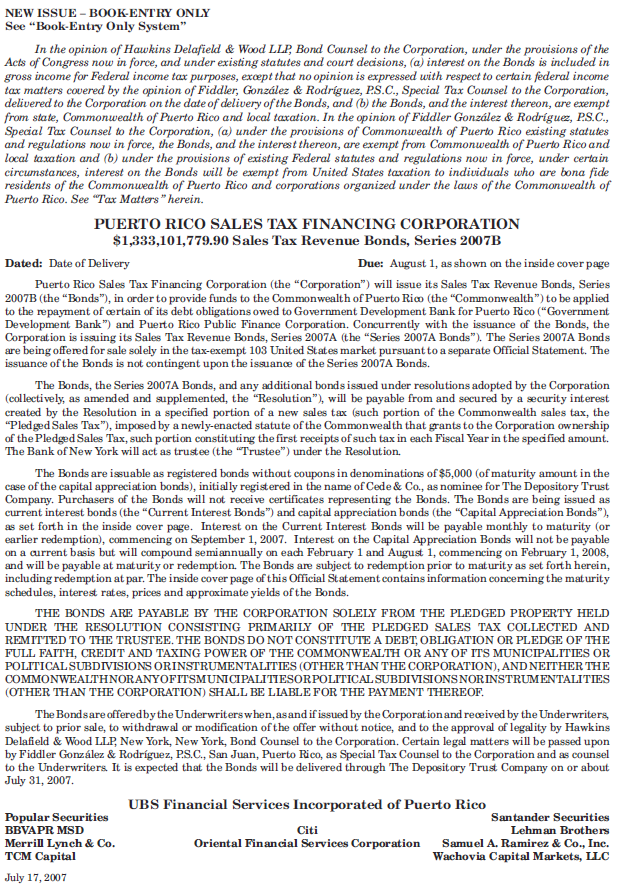 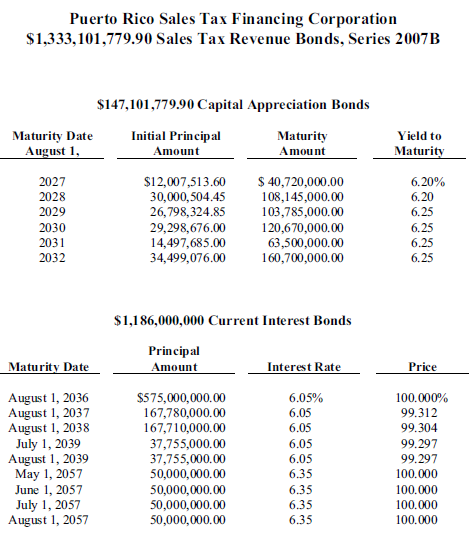 The COFINA 2007B bonds listed in Figure 7 add another wrinkle. These zero-coupon bonds maturing in 2029 and 2030 do not belong in any fund sold to investors with investment objectives of high income consistent with capital preservation. Figure 8 excerpts the Fund's Investment Objectives from the same 2008 Annual Report. Figure 9 excerpts similar language from the Funds 2nd Quarter 2013 Quarterly Review. 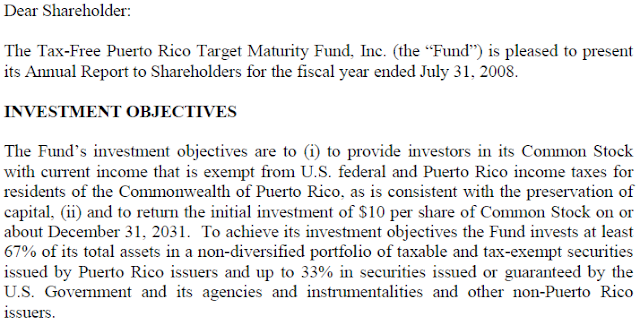 Now, returning to Figure 3, the UBS Funds not only bought 100% of the coupon bonds but also 100% of the $248 million long-term zero-coupon bonds in the COFINA 2008A offering. Again, these bonds don't belong in any fund whose investment objective is high current income consistent with capital preservation. These zero-coupon bonds were nearly 20% of the Tax Free Puerto Rico Target Maturity Fund's net assets but provided no income and exposed investors to the credit risk, interest rate risk and liquidity risk of 30- and 40-year coupon bonds.

UBS Puerto Rico earned billions of dollars in Puerto Rico by underwriting and trading leveraged closed end municipal bond funds and paying retail prices for conflicted bonds it was underwriting. We've illustrated some of UBS's conflicts in the past with the 2008A, B and C ERS offerings on which UBS served as lead underwriter. Because we can't know exactly how much of the ERS offerings UBS took, we can't prove all of its allocation went into the UBS PR Funds. The COFINA 2008A offering on the other hand adds clarity to an assessment of UBS PR's conduct. UBS PR underwrote 100% of this $737 million issue and bought 100% of it into the UBS Funds even though the bonds were antithetical to the Funds' stated investment objectives.