A Non-traded REIT Investor Fights Back

This week a large investor in NYRT, Sorin Capital Management, wrote an open letter urging the NYRT board to sever ties to Schorsch and ARC. View the letter. Good luck to Sorin and other current investors undoing the harm done by Schorsch and ARC's self-dealing. While Sorin may not have invested while NYRT was a non-traded REIT, NYRT management brought the worst of the non-traded REIT world forward past the April 2014 listing with it. It is no surprise at all that NYRT has underperformed its obvious peer SLG by 30% since NYRT listed.

This morning - perhaps in response to the Sorin letter - an advisory firm has proposed to replace the Schorsch controlled advisor on terms more favorable to NYRT shareholders. In early trading today, NYRT is up 8%. Pressure should now mount on the NYRT Board to start behaving like fiduciaries and putting investors first. This picture is a dramatic testament to how easy it would be for the Board to fix what ails NYRT. 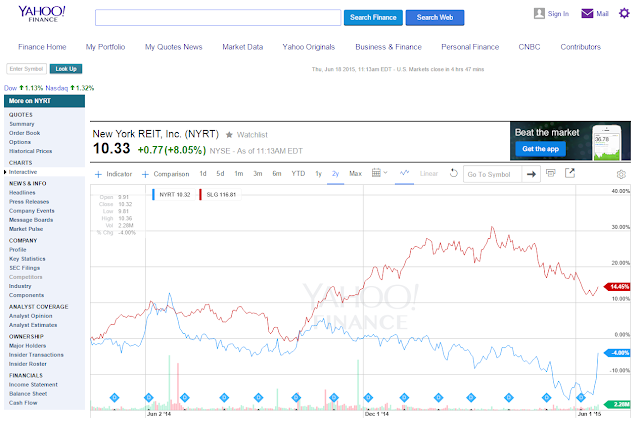