On Tuesday, non-traded REIT American Realty Capital Global Trust Inc. - rechristened Global Net Lease, Inc. - began trading on the NYSE under the ticker GNL. GNL is at least the 42nd non-traded REIT to have listed, or merged into or been acquired by another REIT since 1997 and adds to the mounting wealth toll non-traded REITs have extracted from unsophisticated investors.

If instead of being sold GNL investors had put their $9.91 into Vanguard's REIT Index fund (VGSIX) in the first six months of 2014 and took out the same amounts as GNL distributed, the VGSIX investment would have between worth $1.918 billion at Tuesday's close. Investors in GNL are thus $244 million worse off than they would have been if they had been recommended liquid, diversified, low-cost REITs instead of the illiquid, undiversified, high-cost American Realty Capital Global Trust Inc. Figure 1 presents the value disparity graphically. 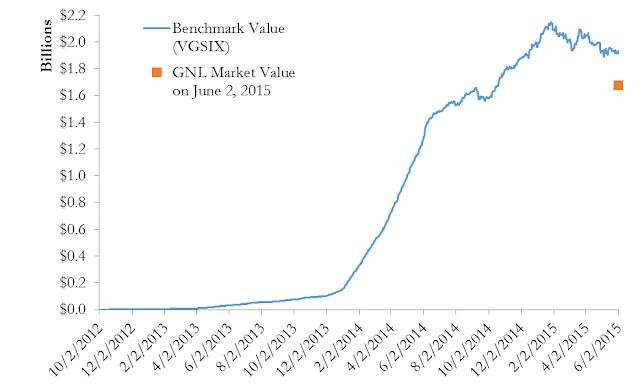 The harm investors suffer from this newly listed REIT is unlikely to end Tuesday. Yesterday after three days of trading, GNL closed at $9.06. Investors who didn't sell on June 2 lost $47 million over the next two days and now have lost on average $37 million as a result of investing in this non-traded REIT.

Concurrent with the NYSE listing, GNL entered into a new long-term contract with its Advisor (controlled by American Realty Capital executives). The new contract increases the Advisor's conflicts of interest, and makes it harder for the REIT to fire the Advisor.

GNL's move to strengthen its ties with its affiliated Advisor is contrary to most non-traded REITs. Normally, non-traded REITs internalize the advisory function at the time of a listing, thus severing relations with the Sponsor and slashing inflated expenses which had been paid to entities controlled by the Sponsor. Interestingly, New York REIT (NYSE: NYRT), another REIT recently listed by American Realty Capital, also chose to maintain its relationship with a conflicted Advisor rather than internalizing the advisory function. Since its listing on April 15, 2014, New York REIT has underperformed a comparably Manhattan-focused REIT by 30%, suggesting that failing to break ties with the Sponsor may cause poor future performance (see Figure 2). If so, the worst may be yet to come for GNL. 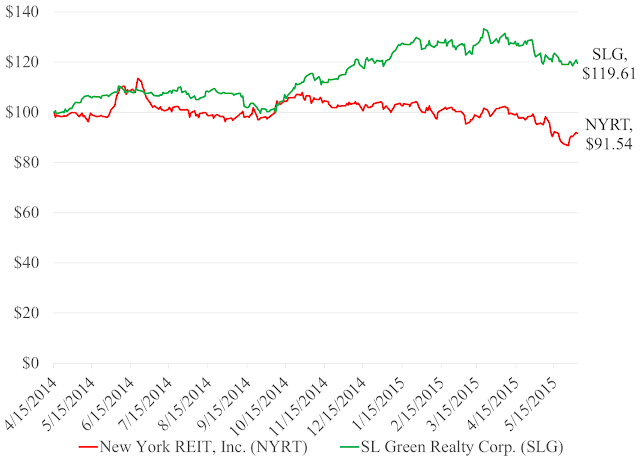