YES Strategies: Know to say no

In recent years, low yields in the bond market and low volatility in the equity markets have combined to give brokerage firms the excuse to develop and sell "Yield Enhancement Strategies (YES)" to retail investors. These strategies almost always consist of selling options on the S&P 500. The sale of an option garners a premium but places the seller (the retail investor) in a short option position. Being short on a call or put option is a risky place to be. In the best-case scenario, the underlying index level doesn't change much and expected volatility remains stable after the investor sells the option, causing the option to expire worthless and allowing the investor to keep the premium. On the other hand, if the index level changes substantially or if expected volatility increases, an investor in a short option position can be exposed to large and potentially unlimited losses. Of course, the brokerage firm always wins because whether the index remains stable or has a volatility spike, the brokerage firm earns the commission from the option transaction. In this short article, we discuss the YES strategy sold by UBS and by Merrill Lynch to its retail clients, analyze its payoff characteristics, and demonstrate the risks to retail investors.

UBS promotes a program to retail investors called Yield Enhancement Strategies in which the primary strategy is an option combination called an "Iron Condor." Merrill Lynch, offers a similar if not identical program through Harvest Volatility Management, LLC which is called the Collateral Yield Enhancement Strategy (CYES). The Iron Condor involves simultaneously entering into 4 options positions on the same equity index with identical expiration dates but with differing exercise prices. These four options combine to give a positive payoff if the index remains fairly stable but to result in losses if the index moves significantly up or down by the time of expiration. The graph below shows the profit diagram at expiration for a stylized Iron Condor. 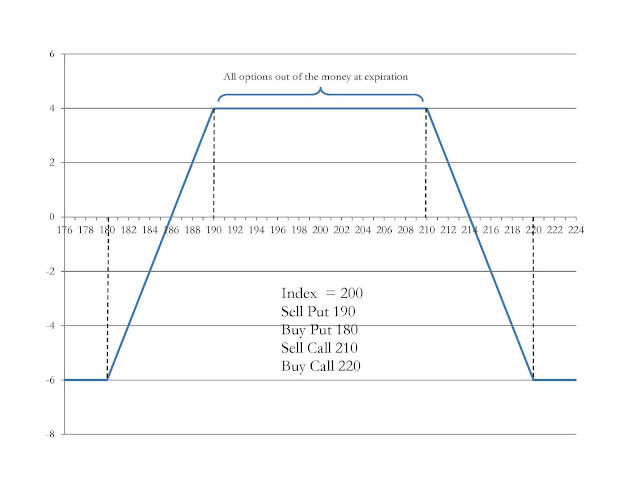 Readers of our blog may recognize similarities between this profit diagram and the payoffs to the short strangle strategy we wrote about that was followed by the LJM Capital Preservation Fund which disintegrated in February 2018.

In this iron condor example, the index at the time the strategy is built is 200. Selling the 190 put and the 210 call generate premiums for the investor's account. A portion of that premium is simultaneously paid to buy the 180 put and the 220 call to truncate downside risk. The net premium is $4. This will be the investor's profit at the expiration of these options positions if the index remains in a band between 190 and 210 and if the investor is allowed to hold the positions until expiration. If the index closes outside of this band the investor will lose at least a portion of the net premium and can lose even more than that. The 180 put and the 220 call put a floor on the amount that the investor could lose, represented by the flat line to the right of 220 and to the left of 180.

When a profit diagram such as this is discussed, it should be emphasized that these profits apply if the positions are held until the expiration date of the options. Prior to the expiration date, significant movements up or down in the index or changes in the market's perception of the volatility of the index can warp the values of the options away from the very precise and seemingly tranquil characteristics shown in a payoff diagram.

Index option values are a function of several variables: the option exercise price, the level of the underlying index, the risk-free rate of interest, the time to expiration of the option, and the volatility of the underlying index. Of these, only the index level, the interest rate and the volatility of the index can change after the option contracts are entered. Changes in the risk-free rate are unimportant for short term options. Changes in index level and index volatility, however, can significantly affect the values of options in the short term. Indeed, profitability of the YES strategy is predicated on sustained low volatility.

The actual strategies by UBS and Merrill Lynch likely involve a series of iron condors simultaneously being held with different expiration dates. To determine the net exposure position of a particular investor would require the analysis of the specific options positions held in the investor's account.

In the first week of February 2018 the US stock market experienced a significant increase in volatility. Over the 6 trading days from February 2 through February 9, the S&P 500 experienced an average intra-day swing of 90 points or 3.3%.For those more familiar with the Dow Jones Industrial, a 3.3% swing equated to an average daily movement of 840 points in the Dow as of early February 2018.This increase in volatility combined with large swings in the level of the S&P 500 had a major impact on the values of S&P 500 index options. Our next example considers a hypothetical Iron Condor strategy using data from early February 2018.

On early February 5, 2018, the S&P 500 was trading in the 2700s. Our hypothetical iron condor consists of selling a 2600 put, buying a 2500 put, selling a 2800 call and buying a 2900 call. For this example we are using the EW2 contract which expires at the end of the second week of February. When the volatility hit the market, the values of these contracts changed dramatically. The approximate prices of these option contracts on early February 5th and later on February 6th are shown in the table below:

The profit diagram for this iron condor is shown in the graph below: 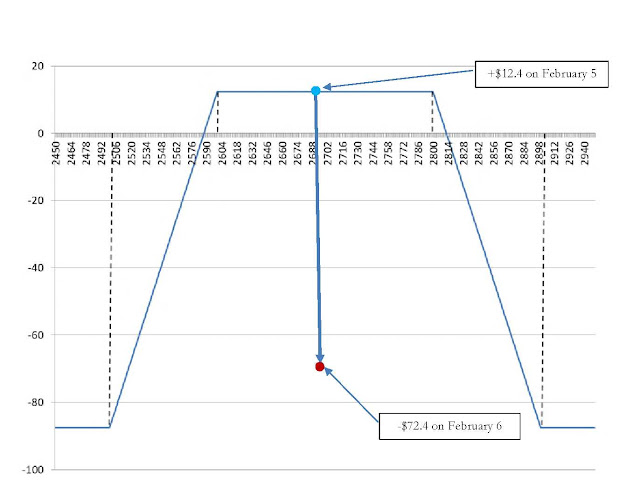 Note that the total amount that can be earned (the top of the inverted U) is significantly less than the potential losses in this strategy.This shape of the profit diagram is consistent across most iron condor strategies. Intuitively this makes sense from a risk perspective. The strategy is likely to pay off most of the time since it takes a fairly large movement to push the index outside of the bounds of the short put and short call. Therefore the profit on the common occurrence (small movements in the index) is small weighed against the loss on the less frequent occurrence (large movements in the index).

As mentioned earlier, changes in the level of the index as well as the volatility of the index will both impact the prices of options on the index. On February 5-6, the level of the S&P 500 declined by as much as 6% in intraday trading. Simultaneously, the VIX (an index that measures the volatility of the stock market) more than doubled. Each of these changes would have an economically significant effect on the values of the options in the iron condor. The Black-Scholes model is an option pricing algorithm from which we can derive expected changes in the price of an option due to changes in the underlying determinants of option prices. For example, if we assume as our base case an index value of 2700, a put exercise price of 2600 and a volatility of 18% on a one-week-from expiration option, the Black-Scholes put option value is $1.83. If we assume in isolation a decline of 100 points on the index level to 2600, the value of the put option rises to $25.48. Of course, a 100 point movement in the index level will always be accompanied by a change in the volatility since volatility is a measure of the variance in the index level. Along with the decline in the index, assume that the volatility doubles from 18% to 36%. The new put option value taking into account both the index level decline and the increased volatility is $51.33.Clearly the change in the option value is dramatically affected by a spike in volatility.

Some brokers and money managers would have you believe that the volatility spike in February 2018 was somehow unusual and unpredictable. Unpredictable, yes. That is the nature of the stock market - it is inherently unpredictable. Unusual, not so much. While the spike was large, the fact that volatility spikes from time to time is not unusual. In fact, it is typical of the long-stretch of history and even the fairly recent stretch. The figure below shows the level of the VIX index since 1990. The VIX is an index that measures volatility in the equity market. 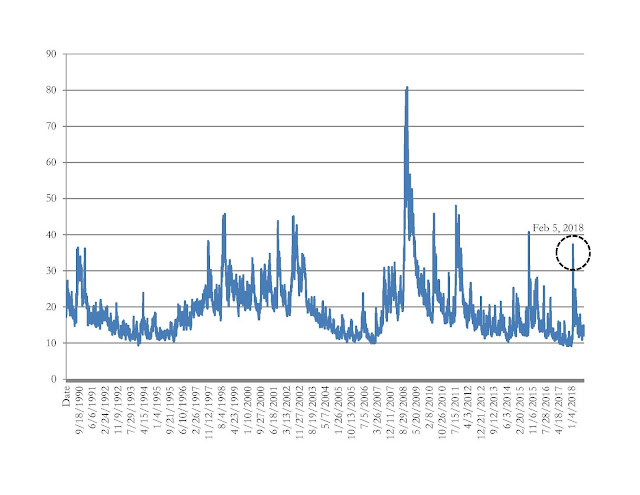 It's quite obvious that the equity market has periods of low volatility and periods of high volatility which seem to come out of nowhere. When employing a strategy such as the iron condor which attempts to garner small payoffs when volatility is low, it is always necessary to understand that a spike in volatilityis just a matter of time. Investors who were placed in an iron condor strategy were exposed to a market where a significant change in the volatility was inevitable.

The explanations of the payoffs and risks to option strategies are often simplified so that less sophisticated investors can be comfortable with the strategies.For example, when we present the profit diagrams, these apply only if an investor is allowed to hold to expiration.Because brokerage firms often prevent this from happening due to margin requirements, investors can lose significant amounts prior to expiration because of forced liquidation.

"In order to establish a YES account, the cash securities used as collateral to support the Mandate must be held in a margin account. The margin release from these securities is used to meet the margin requirements of the option positions held in the YES account. Using the margin release of securities in order to enter into the options positions for the YES strategy results in leverage. The maximum losses incurred can be significantly higher than the premiums received. Clients may be required to contribute additional cash or securities as collateral to support the mandate."