Things Go From Bad to Worse for BrokerCheck

Last week we posted about two brokers who had not disclosed that customer complaints had been adjudicated to arbitration awards in favor of the clients but rather continued to report them as pending up to 15 months after the arbitration award was rendered. See Bad Brokers Falsify Their BrokerCheck Records and No One Notices. Two days ago we showed that FINRA corrected these two brokers' BrokerCheck records in Bad Brokers' Incorrect Records Got Partially Corrected Last Week. We'll let you know when FINRA disciplines these two bad brokers and their employers.

The problem we have identified is vastly larger than just two or three brokers. Hundreds, and perhaps thousands, of active brokers provide falsified BrokerCheck reports to their clients because, like Ms. Shivaee and Mr. Gonzalez, they list arbitrations they've lost as pending or don't list customer complaints at all when FINRA's awards database includes arbitrations they've been involved in and where motions for expungement were not granted.

Before getting to today's fascinating examples, consider the big picture. We spent weeks earlier this year extracting data on 1.2 million brokers from FINRA's BrokerCheck website as part of an effort to determine the extent of broker misconduct and to suggest ways reduce the harm suffered by investors at the hands of bad brokers. See How Widespread and Predictable is Stock Broker Misconduct? The BrokerCheck data is not confidential. In fact, it is supposed to all be made publicly available but FINRA will only let you or us look at it one broker at a time. If you try to look at a lot of it, FINRA will block you from accessing its BrokerCheck website. If FINRA made this data truly publicly available academics and public policy researchers would much more quickly be able to do the research that we and Egan Matvos and Seru (See The Market for Financial Adviser Misconduct) have done.

The examples of bad brokers falsifying their BrokerCheck records that we released last week, again today, and will on a larger scale next week are all developed by combining FINRA's hidden BrokerCheck data with FINRA's arbitration awards database. Consider that for a moment. We accessed FINRA's BrokerCheck database and Awards database with far more difficulty than necessary for FINRA to access these databases. Yet, we can find hundreds of brokers who have obviously been falsifying their BrokerCheck records to deceive clients and potential clients by not disclosing customer complaints and settlements and awards. These bad brokers should all be disciplined with fines and/or suspensions.

The Panel dismissed the claims against Mr. Bozymowski and found Mr. Goldsmith and Ms. Amaradio jointly and severally liable, ordering them to pay the Claimant $133,333.33. The Respondents had all filed motions for expungement which the Panel explicitly denied on page 4 of 5 of the award.

There is one customer complaint listed on Mr. Goldsmith's BrokerCheck but it is from 2000, 10 years earlier than the Lapine claim. The claim and adverse award in Lapine is not on Mr. Goldsmith's CRD even though he was ordered to pay the Claimant $133,333.33 and his request for expungement was denied. 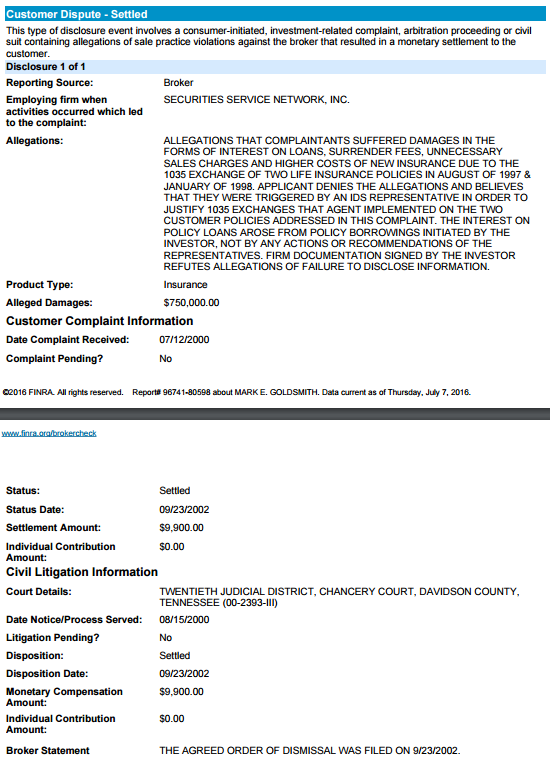 [You can probably guess where this is going.]

Unlike Mr. Bozymowski who had a financial disclosure and Mr. Goldsmith who had an aged customer complaint disclosed, Ms. Amaradio has a pristine BrokerCheck report despite being found jointly and severally liable for $133,333.33 in the 2011 FINRA arbitration and having had her request for expungement denied. Her BrokerCheck report as of July 7, 2016 can be accessed on our website. 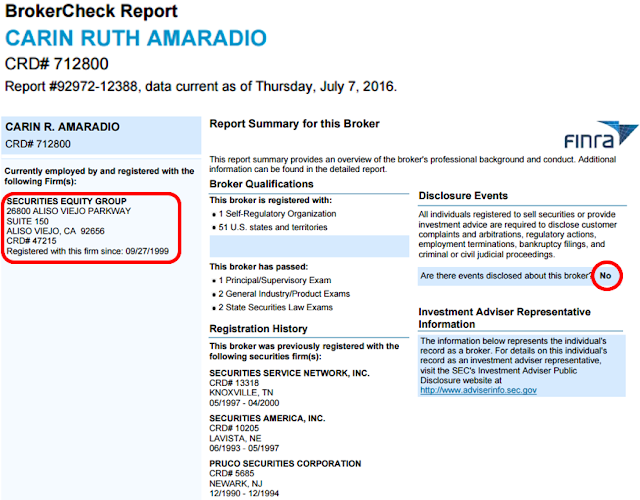 This award and three brokers illustrates a few of the problems we have discovered with BrokerCheck.

The arbitration panel ordered Ms. Amaradio and Mr. Goldsmith to pay a substantial amount to the Claimant and denied Respondents' motions for expungement. Yet five years later this claim and award is not on Ms. Amaradio's, Mr. Goldsmith's or Mr. Bozymowski's BrokerCheck. Clients and potential clients relying on the BrokerCheck reports FINRA provided for these three brokers over the past 6 years have been misled.1

As owners and executives of Select Equity Group, Ms. Amaradio and Mr. Goldsmith, control what gets reported to FINRA, separate and apart from their disclosure obligations as registered representatives.

Each individual in this example reflects a different abusive fact pattern we see in the BrokerCheck data.
We identified this example and at least 75 more with our hobbled access to FINRA's two databases which we will write about early next week. With FINRA's unfettered access and our programming skills we're confident FINRA could find hundreds, maybe thousands, of brokers who have not reported customer complaints, settlements and awards. These brokers all should be swiftly fined and/or suspended.