Oil and Gas DPPs From Just Two Sponsors Have Caused $3.7 Billion in Losses

We have written extensively about direct participation programs, or DPPs. See our blog posts on non-traded REITs and our discussion about equipment leasing DPPs. Oil and gas DPPs are another strain of the DPP epidemic: illiquid exposure to an existing underlying asset, loaded with confiscatory fees, conflicts of interest and unnecessary risk.

The exploration company managers also take advantage of the DPPs by selling the DPPs they manage drilling services at a large mark-up and charging upfront costs that are not related to the success of the DPP. Finally, the managing companies keep an extra portion of net revenues for themselves. In short, energy exploration companies like Atlas Resource use oil and gas DPPs to charge retail investors high fees for accepting some of the exploration company's risk without the corresponding reward.

The DPPs run by an investment company like Ridgewood Energy are exposed to some of the same conflicts of interest as the DPPs run by energy exploration companies. For example, Ridgewood Energy charges high upfront fees, a 2.5% annual management fee, and keeps 15% of any distributions despite having not invested in the DPP. Since - as with non-traded REITs and equipment leasing DPPS - some of the distributions to oil and gas DPPS are a return of investors' capital, Ridgewood and similar investment companies are taking high upfront fees off the top, holding investors' cash and returning a portion of it after deducting a further, large haircut.

We analyze 33 registered DPPs sponsored by Atlas Resource or Ridgewood Energy. Atlas Resource registered 19 funds with the SEC between July 2000 and April 2010 and raised $1.9 billion. The Atlas funds' filings can be accessed here and here. Ridgewood registered 14 funds between April 2004 and October 2009 and raised $1.3 billion. The Ridgewood funds' filings can be accessed here. Only one of the 33 DPPs paid investors back their entire initial investment. That is, 32 of the 33 funds suffered net out-of-pocket losses. The losses were not due to market forces, as an investable energy mutual fund beat all but two of the oil and gas DPPs. The persistently poor performance of the DPPs is driven by high fees, conflicts of interest (poor management incentives), and unnecessary risk.

Figure 1 shows that all of the Atlas funds we examined had out-of-pocket losses. The 19 funds lost a combined $1.1 billion of the invested $1.9 billion by December 31, 2013. The upfront fees accounted for $216.5 million of the losses.

Because the DPPs do not have a liquid secondary market, we estimate the value of the funds on an annual basis using data provided in each fund's most recent 10-K. Specifically, we estimate the fund's value as the sum of the standardized measure of discounted future net cash flows from known reserves, plus cash and short-term investments in marketable securities. We net the estimated value and the distributions paid against the contributed capital to calculate out-of-pocket losses. 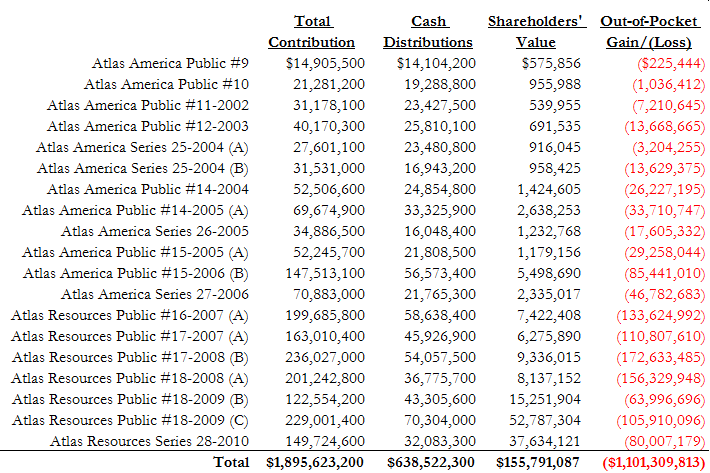 Figure 2 presents the out-of-pocket losses for the 14 Ridgewood funds, which had total losses of $642 million as of December 31, 2013. Upfront fees and asset management fees are responsible for more than $349 million of the losses, and conflicts of interest are responsible for much of the remaining $293 million. 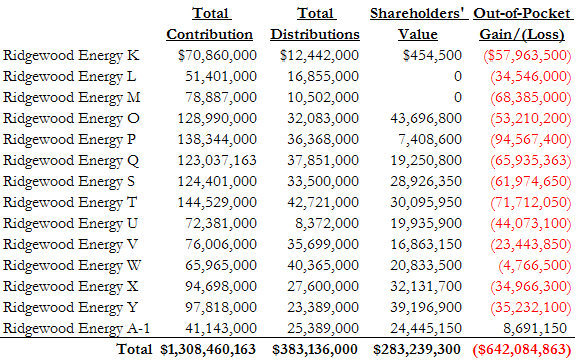 With the high fees, conflicts of interest, and unnecessary risk, it is no surprise that oil and gas DPPs consistently underperform other investments with similar exposure. For example, the Vanguard Energy mutual fund (ticker: VGENX) charges low fees (0.38% per year), and is independently managed, diversified, and liquid. Figure 3 compares the returns for each of the 19 Atlas Resource funds to the returns investors would have experienced if they had instead purchased shares of VGENX. All of the Atlas funds lost money, and all of them performed worse than the Vanguard energy fund. Even in the two cases where the energy benchmark lost money, it performed much better than the DPPs. Overall, by December 31, 2013, the VGENX benchmark had gained $1 billion while the DPPs had lost $1.1 billion. Thus, investing in the 19 Atlas DPPs had cost investors $2.2 billion.

Atlas Resource became publicly traded shortly before Atlas America Series 27-2006 started raising capital. This allows us to compare the performance of the DPPs to the performance of the manager, which itself is an oil and gas exploration company. Investors in Atlas America 27-2006 and the 8 subsequent registered DPPs have suffered $870 million in combined net out-of-pocket losses. If these same investments had been made directly in Atlas Resource, investors would have earned $8.5 billion in net gains. This $9.4 billion shortfall reflects, at least in part, the DPPs' high upfront costs and Atlas Resource's ability to transfer resources and opportunities from its DPP investors to itself.

Figure 4 presents a similar analysis for the Ridgewood Energy funds, with similar findings. For each of the 14 funds, the VGENX investment would have resulted in a net gain instead of a net loss. In total, investors would have earned $860 million instead of losing $642 million if they had invested in the benchmark index instead of the DPPs. Thus, investing in the 14 Ridgewood DPPs had cost investors $1.5 billion as of December 31, 2013.

Figure 4. Out-of-Pocket Gains for the Ridgewood DPP Benchmark (VGENX) as of December 31, 2013

The DPPs' consistent losses can be partially explained by the investments' high fees, conflicts of interest, and unnecessary risk. The 19 funds Atlas Resource registered with the SEC between July 2000 and April 2010 raised $1.9 billion in total and charged 12.5% in upfront fees on average. The fund sizes and fee rates are shown in Figure 5. Atlas Resource stopped registering new funds in 2010, but its 2013 10-K shows it sold more than $100 million in DPPs each year from 2011-2013. This suggests Atlas Resource made a conscious choice to reduce the transparency of the high-risk, high-fee investments it sells. 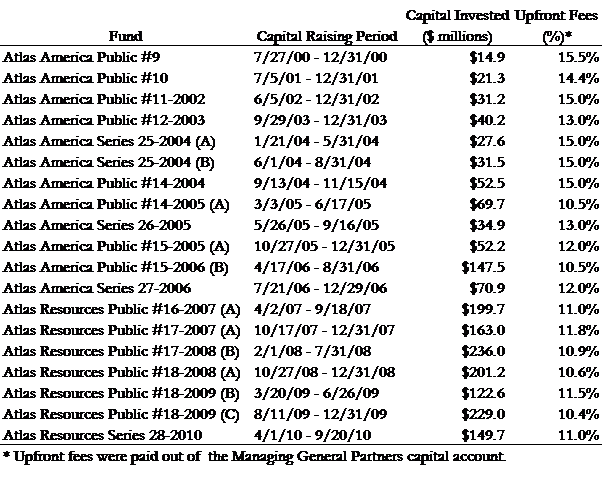 Figure 6 presents the fund sizes and fee rates for the 14 funds Ridgewood Energy registered with the U.S. Securities and Exchange Commission between April 2004 and October 2009. The funds, which raised $1.3 billion in total, charged 16% in upfront fees on average. Ridgewood has not registered any new funds since early 2009, but was offering new funds as late as January 2014 (see article). Like Atlas Resource, Ridgewood chose to move away from transparency. 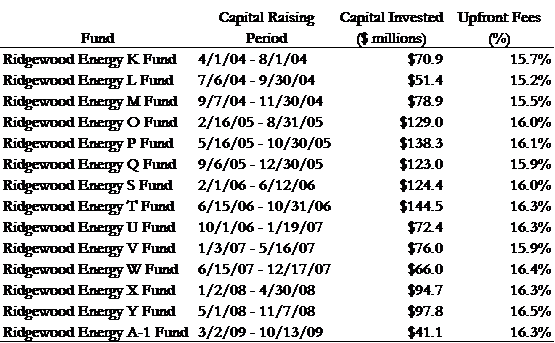 Instead, the sponsor creates a separate entity (the DPP), controlled entirely by the oil and gas exploration company, and uses it to raise money. The new entity charges high upfront fees to investors, which the investors would have avoided by investing in the company itself. The exploration company then sells equipment, labor, and land to the DPP. Because the sponsor/manager/operator has absolute control, the DPP often pays an above-market rate for the equipment, labor, and land. For example, the 2010 10-K for Atlas Resources Public 18-2009C states, "Drilling contracts to drill and complete wells for the Partnership are charged at cost plus 18%. The cost of the wells includes reimbursement to the Partnership's [sponsor] of its general and administrative overhead cost" (p. 32). In other words, Atlas has passed on all of its costs to the DPP, at an 18% mark-up. Atlas also charges the DPP additional administrative costs and monthly fixed-rate well supervision fees (see 2010 10-K, p. 32).

The structure of the DPP also encourages the sponsor to take more risk than it otherwise would. The sponsor has invested little if any money in the DPP, and so does not have much downside risk. On the other hand, the sponsor often receives a large portion of profits. For example, Atlas Resource receives an additional 10% of revenues beyond its contributed capital. In addition to the sponsor's risk-reward imbalance that encourages risky behavior, the sponsor is encouraged to take risks with the DPP because the sponsor can apply what it learns from the successes and failures of the DPP's wells to the sponsor's proprietary drilling.

Like Atlas Resource, Ridgewood Energy has misaligned incentives. However, because Ridgewood is not an energy exploration company, it cannot profit from marking up drilling costs. Instead, Ridgewood charges a higher upfront fee and a 2.5% annual management fee. In addition, Ridgewood keeps 15% of all distributions, despite not having invested in the fund. These different incentives encouraged different behaviors by the sponsors. Atlas was incentivized to drill as many holes as quickly as possible, while Ridgewood was incentivized to prolong the drilling and pay out high distributions. Importantly, in neither case was the primary incentive to drill and operate successful wells.

The high fees and incentive problems discussed above should make anybody wary of investing in a DPP. However, even if those problems didn't exist, the unnecessary risks inherent in DPPs should warn off investors and advisors alike. There is not an active secondary market for oil and gas DPPs, meaning investors' DPPs are extremely illiquid. Lack of liquidity is a risk, and investors should be compensated for it by receiving a higher return. However, DPPs do not have a way to generate the required higher return. The DPPs are drilling wells exactly like the much more liquid energy exploration companies, so the best a DPP can expect to do is earn the industry average. Because it is not possible for DPPs to compensate investors for the liquidity risk, investors are taking an unnecessary, uncompensated risk by investing in a DPP. In addition to the uncompensated liquidity risk, DPPs are exposed to small company risk and concentration risk. The high fees and poor sponsor incentives make it impossible to achieve outcomes sufficient to overcome the small company and concentration risks. By investing in an energy index or even just a publicly traded energy exploration firm, investors could drastically reduce their risk while increasing their expected return. While we don't advocate a focused investment in oil and gas exploration, if you're so inclined an oil and gas DPP is the worst way to get this exposure.

We have written extensively about direct participation programs, or DPPs, in prior posts. Each type of DPP share such undesirable traits that no retail investors should buy these products and no unconflicted advisor would recommend them. Virtually all of the oil and gas DPPs we have seen failed to return investor capital as a result of high fees, conflicts of interest, and unnecessary risk, while mutual funds with similar exposures posted large gains.