We've written extensively about the evils of non-traded REITs. You can read through our other non-traded REIT blog posts. As bad as non-traded REITs are - and they're so bad no one should ever buy one - registered, non-traded Equipment Leasing Direct Participation Programs (DPPs) are worse.

Examples of equipment leasing DPPs include the series of LEAF and ICON trusts we discuss below. Equipment leasing DPPs provide a stark illustration of the DPP deceit which infects non-traded REITs, non-traded BDCs and oil & gas and managed futures DPPs. These investments can only be sold because of the motivation provided by high DPP sales commissions and the lack of price transparency and market discipline.

Direct Participation Programs are registered with the SEC and sold to retail investors but not listed on public exchanges. Without an active secondary market for the shares, there is no reliable way for retail investors to independently judge the prices charged by sponsors and brokerage firms. This lack of secondary trading in shares of DPPs also allows inefficient and self-serving management that would be disciplined by the market for corporate control to persist and harm DPP investors.

In an equipment leasing DPPs a sponsor sells limited partnership units, deducts substantial offering costs and invests the remainder in a pool of equipment leases leveraged up with additional borrowing. Like other DPPs, equipment leasing DPPs market a predictable income stream but a substantial portion of distributions to investors are a return of capital not of income. Equipment leasing partnerships promote the tax benefits investors can achieve through depreciation deductions and interest payments on borrowing used to leverage. The depreciation and interest deductions can only be used to offset income from other passive investments and so this "benefit" is trivial for most investors.

As if that wasn't bad enough, the sponsor and its affiliates deduct high up front and annual fees which guarantee that investors will lose money. Figure 1 is a table from the LEAF III prospectus available on the SEC website. 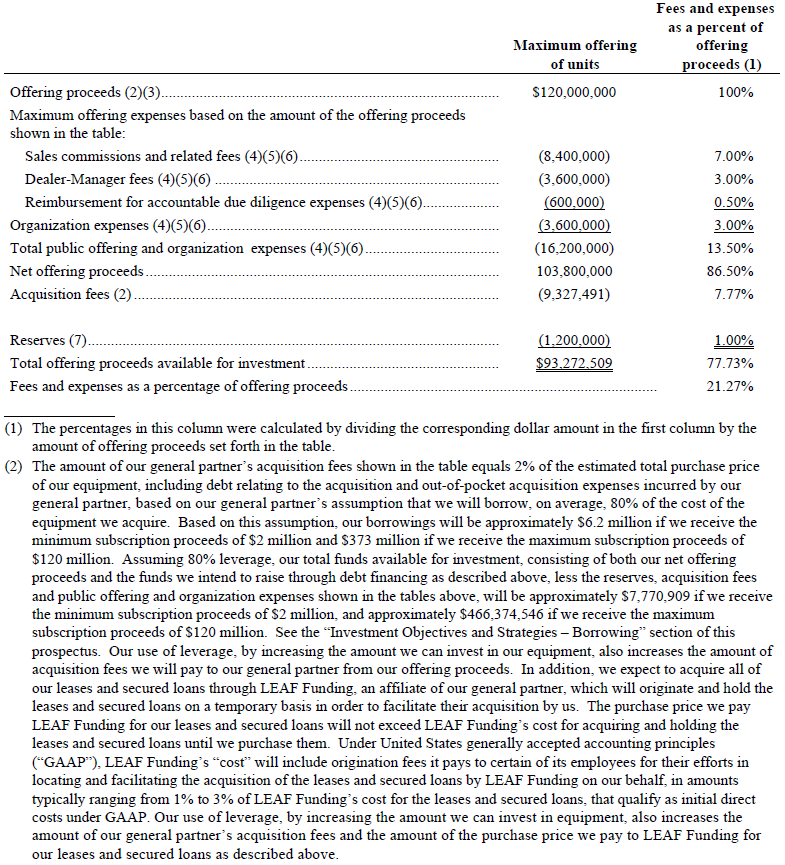 In addition to the cash investments in leases, LEAF III financed 80% of its lease portfolio with debt. The Sponsor received a 2% acquisition fee and 4% of gross rental revenue on operating leases and 2% of gross revenue on full payout leases each year. Thus, the Sponsor was paid for enlarging the lease portfolio quickly without regard for the financing costs or the quality of the leases bought, creating enormous conflicts of interest and ensured investors would lose money.

Completely predictably, LEAF III investors suffered significant losses. Figure 2 summarizes LEAF III results from 2007 to 2013. LEAF III investors' losses are indicative of losses suffered by investors in equipment leasing DPPs more generally. The amortized offering costs, acquisition and management fees charged by the Sponsor can only be covered by lease revenues if there are no credit losses on leases extended to bad credit quality borrowers who face less penalty upon default than if they defaulted on bonds. That is, these equipment leasing programs might work if and only if the leases were backed by the full faith and credit of the US Treasury. Not surprisingly, credit losses have been substantial.

If an investor wanted equity exposure to equipment leases, he/she could buy common stock in equipment leasing companies. The losses investors suffer in equipment leasing DPPs are a result of high fees and shocking conflicts of interest - not problems in the equipment leasing or broader stock market. Figure 3 reports that had the same investments investors made in the LEAF funds been made instead in a market-capitalization weighted portfolio of publicly traded leasing companies, investors would have made $292 million. Thus, LEAF program investors lost $515 million by virtue of LEAF's high costs and conflicts of interest. If the LEAF investors had invested the same amounts, at the same times, in the broad stock market they would have earned $186 million and would have earned $83 million in Treasury securities.

Figure 4 reports that had the same investments investors made in the ICON funds been made instead in a market-capitalization weighted portfolio of publicly traded leasing companies, investors would have made $969 million. Thus, ICON program investors lost $1,146 million by virtue of ICON's high costs and conflicts of interest. If the ICON investors had invested the same amounts, at the same times, in the broad stock market they would have earned $684 million and would have earned $363 million in Treasury securities.