UBS underwrote many of the bonds UBS bought for the bond funds. In addition, UBS is a major municipal bond dealer. UBS, thus, might enrich itself at the expense of its clients by having the funds' portfolio managers pay excessive markups. UBS does not make detailed data on the bond funds' holdings and transactions publicly available so it is hard to know for sure whether UBS has succumbed to this potential conflict of interest. We provided some evidence that this is an area that regulators may want to look at more closely based on our Using EMMA to Assess Municipal Bond Markups.

We're not the first to comment on the extraordinary conflicts of interest engulfing UBS affiliated companies through the UBS Puerto Rico bond funds. Back in February 2009, David Evans of Bloomberg reported on UBS's myriad roles including as financial advisor to the Puerto Rican Employees Retirement System in Puerto Rico Pension Gets Fee Bonanza Seen as Conflicted. David's fascinating story was ominously prescient as bonds underwritten by UBS from this issuer and from the Puerto Rico Sales Tax Financing Corporation appear to be the main sources of losses in the funds in 2013. We'll write more about how UBS's conflicts of interest explain much of the losses in the UBS Puerto Rican bond funds in upcoming blog posts and a working paper.

In the meantime, I thought you would be interested in this bit of buffoonery from UBS.

On Christmas Eve, we received a letter from a Puerto Rican law firm, McConnell Valdez LLC, on behalf of UBS Asset Managers of Puerto Rico threatening us unless we retract the very mild statements we made about the UBS funds and desist from distributing any further research or commentary into the funds. UBS Asset Managers of Puerto Rico doesn't want us to point investors and regulators to potential conflicts of interest, fraud or mismanagement in their funds. We think investors deserve to know how they lost $2 billion in UBS's Puerto Rican bond funds. UBS could provide transaction and holding data to SLCG or some other financial research firm and allow the truth to set it free.

Of course, if the truth won't do, UBS should hire a lawyer to send abusive, threatening letters to try to squash independent research. 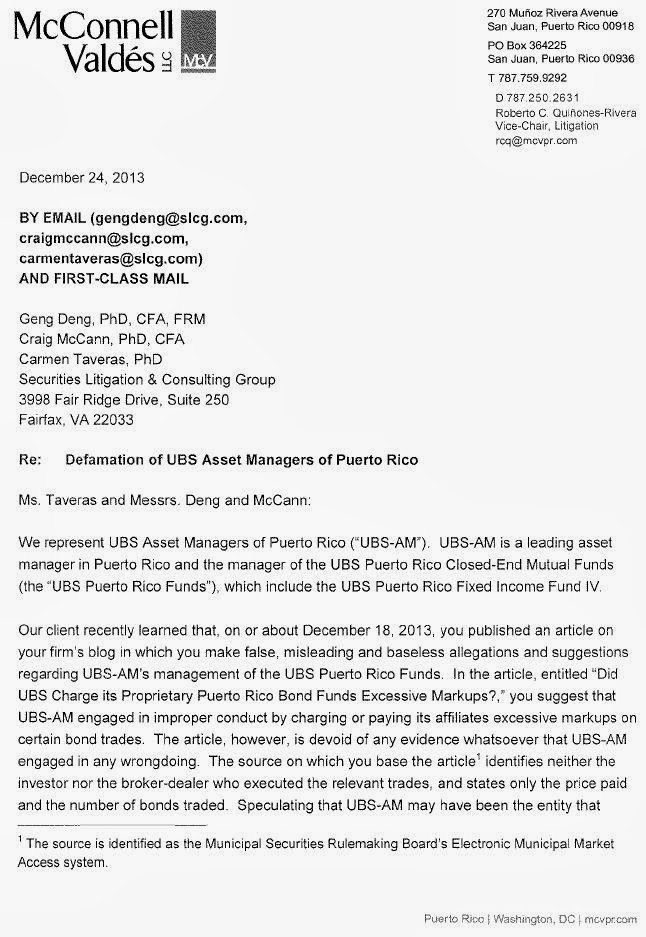 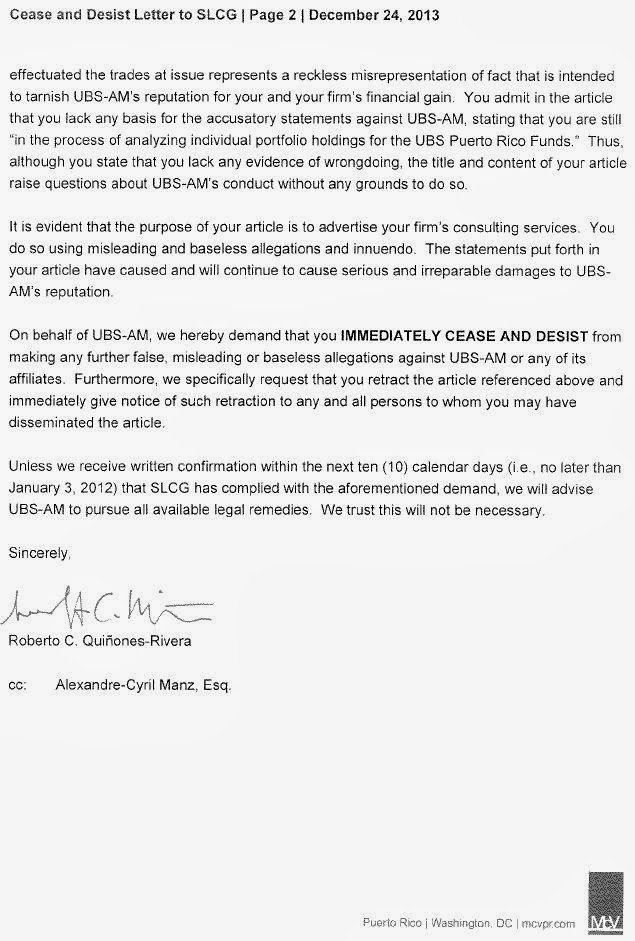