UBS Puerto Rico's closed-end funds have received much attention in recent months. While the coverage has focused on the funds' leverage and concentration in Puerto Rican municipal bonds (see for example, New York Times and Bloomberg), discovery and further research into the funds is likely to reveal other important issues -excessive markups, for instance.

Investors, including mutual funds like the UBS Puerto Rico Funds, buy municipal bonds from dealers who typically charge a markup over the price that the dealers pay for the bonds. A trade history for each municipal bond is available through the Municipal Securities Rulemaking Board's Electronic Municipal Market Access system. Comparing the markup (often computed as the difference between the purchase price and the inter-dealer price on the same day) with the distribution of markups for similarly-sized trades, we can determine whether the markup on a particular bond trade is unusually large and therefore likely excessive. SLCG has a research paper measuring excess markups on municipal bonds (PDF).1 In this post, we illustrate how to apply the methodology developed in the SLCG paper to the bonds in the UBS Puerto Rico Funds.

The table below shows the trading activity from September 27, 2011 to November 10, 2011 in a $51.55 million face value, 6% coupon Puerto Rican municipal bond (CUSIP 74527EFA1) issued in July 2011. Using monthly data on portfolio holdings for US mutual funds we know that the Oppenheimer Rochester VA municipal fund (ORVAX) had purchased $1,645,000 of this bond in October 2011. On October 14, 2011 we see a customer purchase of the same par amount as the amount held in the ORVAX fund. 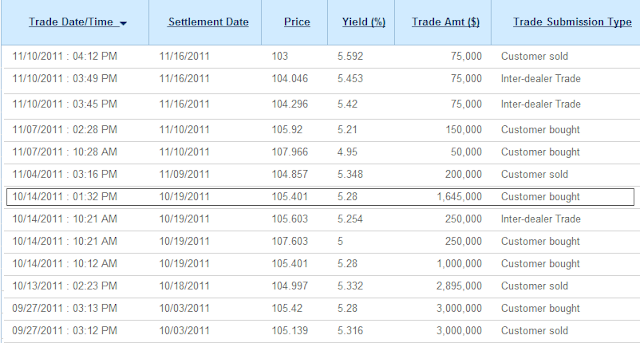 This pattern is consistent with the published literature including our own research on municipal bond markups, which document that markups are larger on smaller trades and are larger than markdowns on similarly-sized trades. Fixed costs in processing trades and better informed large traders are two forces likely behind the empirical finding that large trades typically are charged lower markups.2 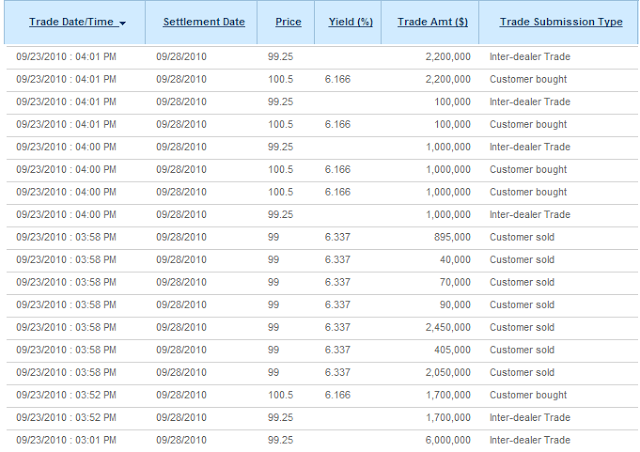 UBS's bond funds should pay miniscule markups consistent with large purchases by institutional investors but by virtue of its common control of the bond underwriter, the bond deal and the portfolio manager, UBS might have paid much higher markups since the benefit of such high markups flow to UBS and the costs are almost entirely born by fund investors.

Although we currently do not have access to such detailed transaction data, we are in the process of analyzing portfolio holdings using the 114 (and growing) annual reports and mid-year holding reports from 2008 to 2013 that are currently available to us. Stay tuned for our analysis which we will post in the coming weeks.