By Craig McCann and Regina Meng.

Last week, Blackstone Real Estate Income Trust ("BREIT") announced that it was not going to honor redemption requests from investors in excess of 2% per month and 5% per quarter. In response, Blackstone's stock price fell 7% the first day and another 7% over the following week.

In this note, we explain how BREIT smoothed and inflated its reported returns for years, leading to extraordinary accolades, a prominent role in important regulatory debates and large investor inflows.[1] A run on the bank has started. Blackstone will be flooded with redemption requests it cannot honor without revealing BREIT's true NAV. Blackstone's prior conduct leaves it with two very bad options. It can honor redemption requests and see its NAV cut in half or it can severely limit redemptions for the foreseeable future until it can slowly adjust its reported NAV down to its true NAV.

Blackstone has been able to raise so much money from investors because it has reported high and steady returns relative to traded REITs while providing limited but sufficient redemption opportunities to appear nearly as liquid as traded REITs. BREIT reserves the right to halt redemptions altogether at any time in its sole discretion but has met redemption requests subject to a 2% of NAV per month, 5% of NAV per quarter limit. BREIT's redemption limits do not provide real liquidity. Compare the 2% monthly cap to the monthly trading in a traded REIT like Simon Property Group which has median monthly trading of 10% and mean trading of 15% of market capitalization. It is the illusion but absence of trading that makes BREIT NAV returns look good. Blackstone is telling investors that its reported returns are extraordinary but only allows no more than 2% of investors in any month to realize these returns.

We made a presentation to a training program four weeks ago in which we discussed BREIT's relatively good performance compared to traded REITs. We pointed out that BREIT's NAV was certainly artificially smoothed and looked significantly inflated. BREIT holds $118 billion of mostly residential and industrial commercial real estate. These sectors' traded REITs have lost nearly 30% in 2022 while BREIT claims a 9% year to date return. As we explain below, this enormous gap between BREIT's claimed cumulative returns and traded-REITs' mark-to-market returns resulted from BREIT assuming its properties would be worth a lot more in the future than is implied by transaction prices. See Figure 1. 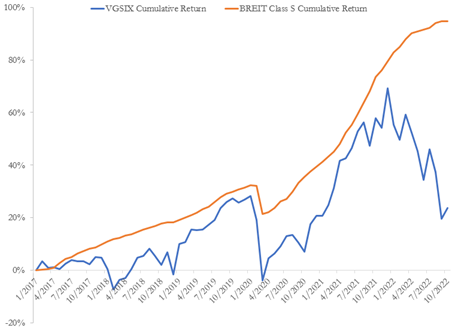 Not Really Appraisals; BREIT Simply Assumes its Returns Will be Really Good!

According to its most recent 424B3, BREIT values $118 billion of real estate by assuming high single digit growth in net operating income, assuming exit cap rate of 5.4% and 5.5% and assuming discount rates of 6.9% and 6.8% for rental housing and industrial properties which account for the vast majority of its holdings.[2]

Every monthly 424B3 up to and including the one BREIT filed a month ago includes exactly this paragraph and table.[3]

These assumptions are determined by the Adviser, and reviewed by our independent valuation advisor. A change in these assumptions would impact the calculation of the value of our property investments. For example, assuming all other factors remain unchanged, the changes listed below would result in the following effects on our investment values:

BREIT's filing dated November 14, 2022 includes the following modified paragraph and table. We highlight a critical sentence Blackstone adds to the most recent 424B3 for the first time as stuff starts hitting the fan.

These assumptions are determined by the Adviser, and reviewed by our independent valuation advisor. In addition, the valuations for our two largest sectors (rental housing and industrial) assume high single digit net operating income growth in the near term given our below market rents and short duration leases. A change in these assumptions or factors would impact the calculation of the value of our property investments. For example, assuming all other factors remain unchanged, the changes listed below would result in the following effects on our investment values: [emphasis added]

Blackstone's belated disclosure highlights the significance of its assumptions in generating purported returns and partially reveals for the first time its sleight of hand.

Because Blackstone does this exercise every month with very slight changes in assumptions about discount rates and cap rates BREIT's NAV is smoothed. Also, since Blackstone has built in very substantial assumed future capital appreciation into its model, the NAV just keeps climbing with each passing month even if property values are falling.

What could go wrong?

BREIT has not delivered a 9% year to date return as it recently said. BREIT simply assumed its performance and assumed it was much better than any of its peers.

Until last week, there had not been sufficient redemptions to test BREITs purported valuations and returns. If BREIT's model-based NAV approximates the value of its underlying properties, BREIT could meet all redemption requests without the outperformance it has reported for years evaporating. If BREIT's NAV materially exceeds the true value of its properties, Blackstone will have to strictly enforce the redemption limits to protect the NAVs and prior claimed returns or meet redemptions requests and see its returns drop back in line with the long run return to traded REITs.

Blackstone can ride this out limiting redemptions to 2% per month but over time the gap between the BREIT cumulative value and the traded REIT benchmark will disappear. Blackstone had not been tested but now it is being tested and the truth is being revealed. Smart money is trying to get out of BREIT when the NAV is significantly overstated. Over the next year or two BREIT will fall 35% relative to the traded REIT index.

[1] The North American Securities Administrators' Association' attempts to put a 10% cap on direct participation programs, including non-traded REITs has been opposed by the industry, largely pointing to the growth and high, steady returns of BREIT. Problematically, counterfactually assuming Blackstone had found the secret sauce to large scale commercial real estate investing, if the concentration limit fails because of BREIT's capital raising prowess, reported outperformance and effective lobbying efforts, retail accounts will be loaded up with oil & gas DPPs and newly launched non-traded REITs not just BREIT.