Investors Lose Over $7 Billion in SandRidge Energy Stock and Notes

In recent months, investors have lost billions of dollars as a result of their investments in SandRidge Energy, Inc. stock, notes and bonds. Sandridge is involved in the exploration and production of oil and natural gas in the continental United States with some interests in the Gulf of Mexico.

SandRidge's stock price has lost 99% of its value since 2014, erasing more than $4 billion of market capitalization. In addition to near complete losses to SandRidge stockholders, investors have lost billions of dollars in SandRidge notes. SandRidge Energy has multiple classes of notes outstanding, the traded prices of which are presented in the following figure. Across all outstanding SandRidge Energy notes, investors have suffered approximately $3.3 billion losses. 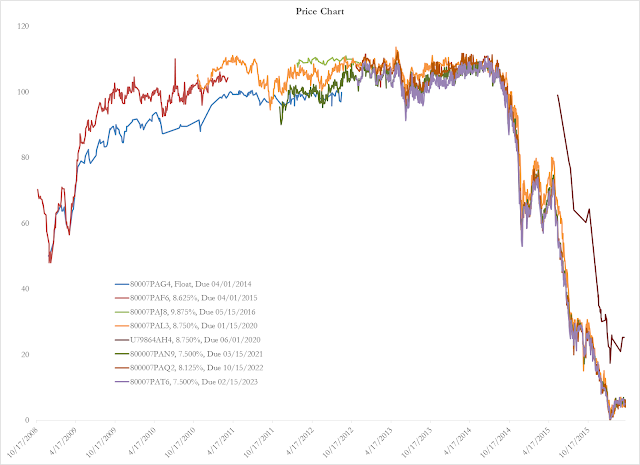 All classes of SandRidge Energy noteholders have suffered staggering losses. The Senior Notes (unsecured) are trading at roughly 5 to 6 cents on the dollar. At these prices, noteholders are expected to receive less than one year's worth of interest and recover virtually nothing through bankruptcy. Even SandRidge Energy's recently issued Senior Secured Notes (issued June 10, 2015) plummeted in value virtually right out of the gates (see CUSIP EK945529). Those Senior Secured Bonds, with roughly $1.3 billion principal outstanding, trade as of April 2016 at roughly 20 cents on the dollar.

SandRidge fell victim to the recent decline in global oil prices. The following figure illustrates the decline in oil prices and the corresponding declines in SandRidge Energy's stock price. In the Fall of 2014, crude oil prices began falling from their highs of $105/barrel, reaching the mid $50s by the end of 2014 and declined further in early 2016, falling as low as $26.2 per barrel. 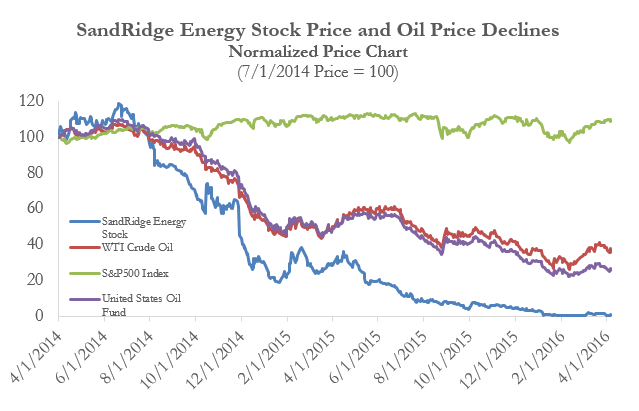 Losses to Sandridge Energy shareholders have been more severe than to other oil and gas exploration companies, as illustrated in the following figure from SandRidge's own 10-K filing: 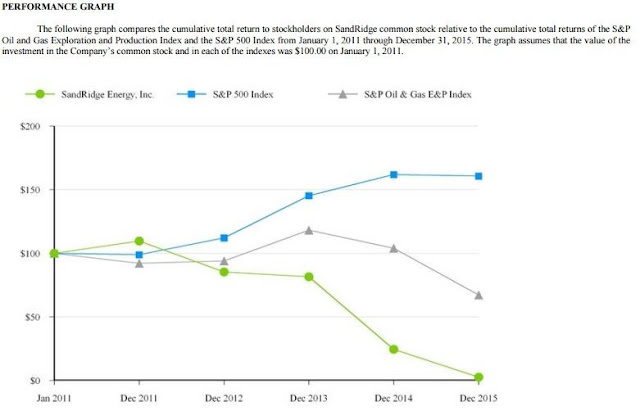 SandRidge Energy is a highly leveraged company, and thus its earnings are more sensitive to decreases in revenue as a result of lower energy prices. SandRidge's debt-heavy capital structure and dwindling liquid reserves left no margin for the type of large losses incurred when oil and natural gas prices declined during 2015 and 2016. These losses have eaten through most of SandRidge Energy's shareholder equity, as illustrated in the following excerpt from SandRidge's 8-K filed March 29, 2016: 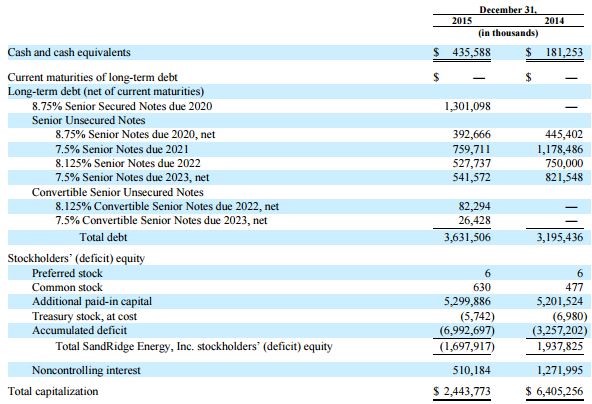 SandRidge Energy's most recent financial statements provide insight into why investor losses have been so severe. The majority of SandRidge Energy revenue comes from oil, natural gas, and natural gas liquids (NGL), the values of which decreased significantly over the past two years. Correspondingly, revenues decreased 21% year over year for 2014, followed by a 51% decrease for 2015. Although the company describes itself as an oil and gas exploration and production company with other interests in related businesses, the revenue breakdown illustrates that this is not a diversified company, it is one heavily concentrated in exploration and production.

Losses would have been worse without hedging

SandRidge used derivative contracts to hedge against declining energy prices. The following table illustrates that those hedges provided positive cash flows which increased the net revenue per unit of output for all energy products. The company's hedging policy provides some cushion in the near term, but will cease to supplement revenues should low energy prices persist for longer periods.

The valuation of reserves has decreased due to both falling prices for energy commodities and the closing of existing wells necessitated by declining energy prices' impact on revenues. Analysis of the expenses enumerated on SandRidge Energy's Income Statement reveals a $4.5 billion impairment charge as a result of write-downs.

The overall picture emerging from the financial statements, and supported by the market prices for SandRidge Energy's notes and stock, indicates that low energy commodity prices have crippled the company and that it is on the verge of bankruptcy. Most shocking are the low recovery rates to noteholders implied by the prices of SandRidge notes. Should energy prices remain low for a sustained period of time, SandRidge Energy will almost certainly be forced to file for bankruptcy protection.

The magnitude of losses to SandRidge Energy investors is staggering. Noteholder losses exceed $3 billion, and equity investors have lost more than $4 billion.

Despite their high yields and seniority, Sandridge Energy bonds are risky. Investments in all classes of Sandbridge securities come with heavy exposure to volatile energy commodity prices. Those risks are easily diversifiable, and SandRidge Energy investments should have been, at most, very small portions of investor portfolios. Proper diversification limits investor losses from any one security, such as SandRidge Energy.

Unfortunately, many financial advisors concentrated client portfolios with large allocations to SandRidge Energy bonds or notes, chasing the higher yield promised by these notes during a low interest rate environment. Some investors had nearly all of their portfolios in these securities. Those investors with overly concentrated portfolios of SandRidge securities suffered large losses and may have recourse to recover those losses.