The best thing that can be said of the Priority Income Fund is: After 2 years Behringer Harvard has only been able to sell about 3% of the shares it registered. The Priority Income Fund is so far beyond the "reasonable-basis suitability" pale, if your broker recommended this investment to you, you should fire your broker and look at what else they've tried to sell you.

The Priority Income Fund is a non-traded closed-end fund that invests almost all its assets in junior and equity tranches of collateralized loan obligations (CLOs) backed by 'leveraged loans' made to medium to large below investment grade companies. PSSI has many of the controversial features of non-traded REITs and BDCs, including high upfront fees, lack of price transparency, lack of liquidity and a remarkable 2/20 ongoing management fee, which is common in hedge funds but not in retail investments.

Leveraged loans are loans issued to below investment grade corporations.ii The loans are frequently large and extended by a syndicate of lenders intending to re-sell participations in the loans to other banks and institutional investors including hedge funds, mutual funds and CLO trusts.

S&P and the Loan Syndications and Trading Association (LSTA) produce benchmark indices of the market value of leveraged loans. Figure 1 plots the price and total return indexes from 2005 to 2015 for the largest loans of the type securitized into CLOs.iii The index level declined substantially in late 2008 and has rebounded since. This leveraged loan market pattern coincides with the high yield bond market decline and rebound.iv 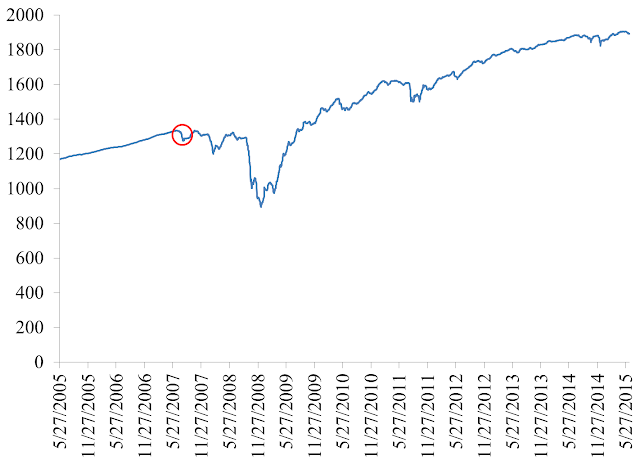 The fairly modest decline in leveraged loan values in July 2007 circled in red in Figure 1 was enough to wipeout the value of equity tranches in CLOs - exactly the investments Priority Income Fund exclusively invests in. In 2012, my co-authors and I wrote about the failure of CLO equity tranches in "CLOs, Warehousing, and Banc of America's Undisclosed Losses". Prompted by our research, Gretchen Morgenson wrote "An Investment Wipeout That Didn't Have to Happen" for the New York Times. As you can see in Figure 1, there are dozens of periods in the past 10 years when CLO equity tranches would lose most or all of their value.

Collateralized Loan Obligations (CLOs) are securities issued by a trust which invests in leveraged loans. CLO trusts package exposure to the underlying leveraged loans into slices (called 'tranches') that represent varying degrees of risk. The leveraged loans serving as collateral for the CLO produce cash flows that used to pay the CLO investors. One of the CLOs the Priority Income Fund currently holds is the ING IM CLO 2013-3 Subordinated Notes due 2026.v

The ING IM CLO was a $518 million deal at issuance with five tranches paying floating interest based on LIBOR and one tranche of the subordinated notes).vi Figure 2 shows the capital structure of the ING IM CLO.

The Class A notes at the top of the ING CLO capital structure have first priority in interest payments and principal repayment and so is the least risky tranche. The equity tranche - the Subordinated Notes - bought by the Priority Income Fund - is unsecured, subordinated and leveraged 12-to-1 in the underlying leveraged loans. The average initial offering leverage across the PSSI's 44 holdings on March 31, 2015 was also 12-1.

The leveraged exposure to the underlying leveraged loans in each of these CLOs can be approximated by taking the ratio of total invested capital to the liquidation preference of the equity tranche. If the underlying collateral is adversely affected by market conditions, the coverage tests may begin to fail and at that point the likelihood of the equity tranche receiving any payments through the deal is greatly diminished.

PSSI's prospectus states that during the investment period, the proceeds will be invested "cash, cash equivalents, U.S. government securities, money market funds, repurchase agreements and high-quality debt instruments maturing in one year or less from the time of investment".vii Because the fees on PSSI are much higher than the yields on such instruments, the net asset value on the fund will likely decrease substantially during this period. The prospectus also states that regular cash distributions are to be determined quarterly and paid monthly starting within one calendar year of the completion of the minimum offering.viii Any distributions made before significant CLO assets could be purchased would either be a return of investor principal or proceeds from borrowing.

The PSSI prospectus makes the following claim regarding CLO assets and their relative risk and return tradeoff:

The most junior tranches of all U.S. CLOs (typically referred to as CLO equity tranches) have delivered nearly 21% annual average cash yields since January 2003, as shown in the chart below, and, according to Moody's CLO Interest (July 2012) no CLO issued since 2002 has suffered a principal loss on a rated debt tranche (including during the credit crisis).ix

Many investors will not realize that while both statements may be technically accurate, they are misleading with respect to the PSSI portfolio.

First, PSSI invest in equity tranches. US CLO equity tranches are unrated and therefore the fact that rated tranches have not suffered principal losses is irrelevant to assessing the riskiness of PSSI. Second, equity tranches are typically not secured, and technically have no principal amount that could be written down even if its mark-to-market value of the tranche has declined. Put differently, CLOs are often under no obligation to return the amount invested in an equity tranche, only income remaining after paying all other tranches (if any). In a similar sense, most distressed bonds do not suffer principal losses as defined in the context of a CLO, even though there is a significant chance an investor may lose some of their investment. The important point is that equity and junior CLO tranches are typically very highly leveraged and "are subject to a higher risk of total loss".x

PSSI embeds significant fees, both upfront and on an annual basis, summarized in Table 2 below.xi 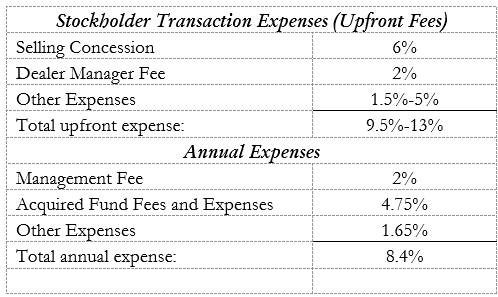 There are additional expenses not included in Table 2. An example is the incentive fee, which is contingent upon the performance of the underlying assets exceeding the fixed fees for the fund by an amount that exceeds PSSI's hurdle rate of 6% annually. In addition, performance fees charged on the underlying assets would also increase annual expenses depending on returns.

Expenses are increased through the use of leverage. For example, if PSSI's Advisor borrows 10% of fund assets, this borrowing increases the base management fee by 10%. This borrowing would also incur interest costs that are not included in the annual expense estimates. If the interest rate is 5%, these two expenses alone would increase the annual expenses to over 9%.

Shares of PSSI are very illiquid. The prospectus states that "you should not expect to be able to sell your shares regardless of how we perform" and "[i]f you are able to sell your shares, you will likely receive less than your purchase price".xii On the other hand, the issuers intend to implement a limited share repurchase program in which the total amount of shares that can be repurchased is limited to 20% of the weighted-average shares outstanding.xiii

PSSI, like other non-traded investments, is an extremely high cost, illiquid, and risky offering. Its upfront fees (at over 9%) rival that of non-traded REITs, while its ongoing fees are very similar to the 2/20 fee structure employed by hedge funds. PSSI is not listed on a public exchange and therefore have neither observable market prices nor any opportunity to sell shares in the secondary market. PSSI's portfolio of leveraged loans and junior and equity tranche CLO assets must be highly leveraged to overcome the onerous fees and expenses.