On Wednesday last week, another non-traded REIT listed on a public exchange. United Development Funding IV (ticker: UDF), which sold as a non-traded REIT for $20 per share, closed its first day of trading on the NASDAQ at $19.60. As we have argued extensively in the past, we think that non-traded REITs are a very bad deal for investors, and UDF IV was no exception.

We have gone through all of UDF IV's SEC filings and applied the gross proceeds, distributions, and other cash flows to a liquid, low cost benchmark using the same procedure we have used previously. UDF IV raised approximately $647 million from November 2009 to its listing last Wednesday. We find that, including all $54 million in distributions, investors would have been $34.8 million better off had they invested these proceeds in the benchmark. Once again, we find that liquid, low cost traded REIT funds to be superior to illiquid, fee-laden non-traded REITs.

However, UDF IV is unique in one respect. Unlike most other non-traded REITs, UDF IV's assets consist almost entirely of loans to real estate developers rather than properties. This type of REIT is typically called a mortgage REIT (though the holdings may not consist only of mortgages), which are not uncommon amongst traded REITs. Mortgage REITs differ from property-holding REITs because they are sensitive to different risk factors: while property-owning REITs are sensitive to the market value of their properties, mortgage REITs are much more sensitive to interest rates and credit risk.

For this reason, the benchmark we have chosen for UDF IV is not the broadly diversified Vanguard Real Estate Index Fund we chose for most other non-traded REITs. Instead, we chose the iShares Real Estate Mortgage Capped Fund (ticker: REM), an exchange-traded fund that invests in mortgage REITs. This benchmark better reflects the risks and returns of real estate loans, rather than properties. Had we used the Vanguard fund, the shortfall would have been $98.8 million rather than $34.8 million. 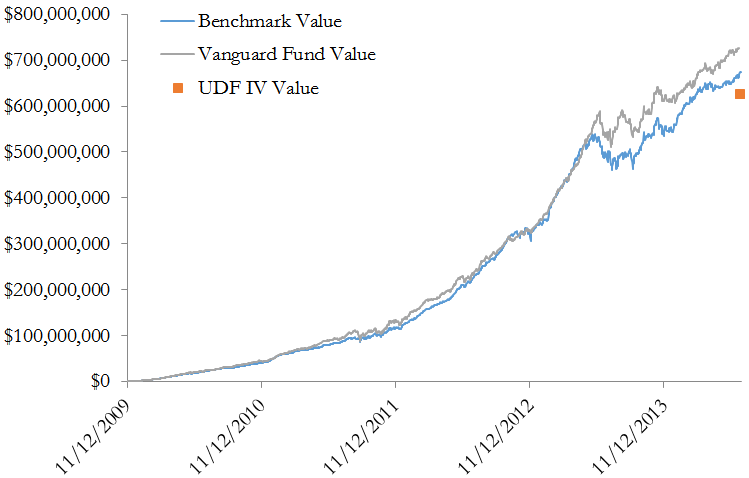 While REM has had lower returns than the Vanguard fund over this period, UDF IV has done even worse. We will say it again: if investors want real estate exposure in their portfolio, there is no reason to choose illiquid, high-cost non-traded REITs. The alternatives are almost always superior.