Structured Product Based Variable Annuites are Riskier Than Advertised

My colleagues and I have a paper in the current (Winter 2014) Journal of Retirement about structured product based variable annuities (spVAs), which are variable annuities with index-linked accounts that have a payoff similar to structured products. We have been following the market for spVAs since they were first introduced in 2010, and distributed our first working paper in 2011. Since then, three issuers have sold more than $3 billion worth of spVAs, according to a recent article in InvestmentNews.

As spVAs garner more attention, it is important for investors to recognize that spVAs are extremely complex and risky investments. spVA marketing materials highlight that, unlike traditional variable annuities, spVAs 'buffer' downside losses to a certain extent (10-30%). However, as we show in our paper, issuers can more than make up for this 'protection' by setting a cap level, which reduces the potential for large gains, and by linking to index values rather than the total return of a indexed mutual fund-like subaccount.

For example, we calculated what a fair cap level would be for investments linked to the S&P 500 for various buffer levels, terms, and linked indexes. As described in the paper, we use a Black-Scholes model to value the embedded derivative position in the spVA as of each day from January 2005 to April 2013. The resulting fair cap levels for a one year term and three common indexes are shown below: 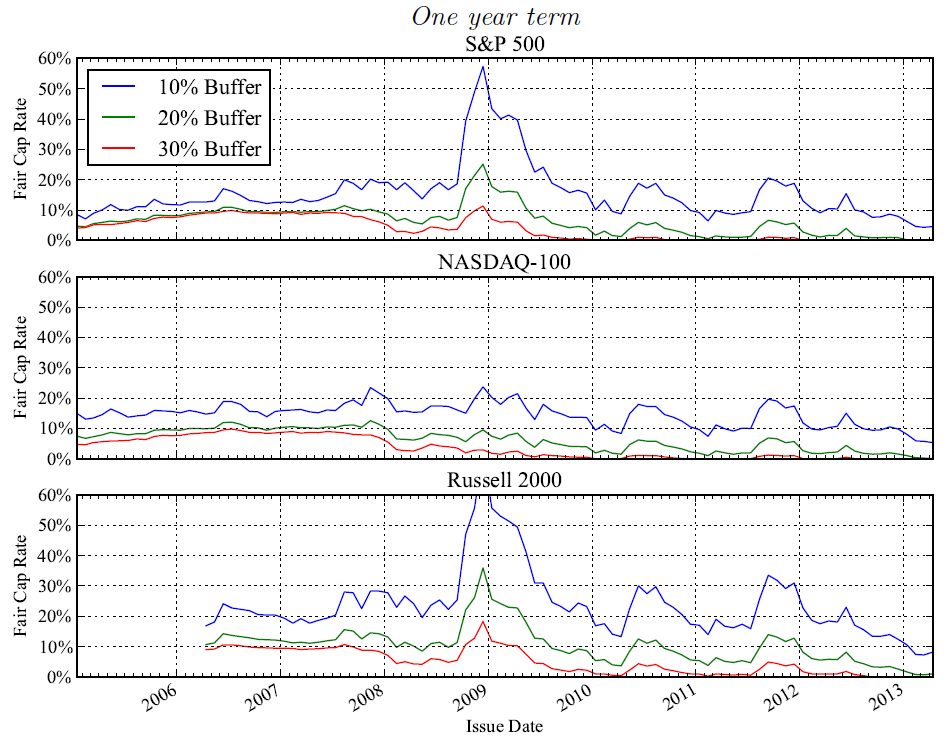 These complexities are in addition to the other unfavorable features of variable annuities, such as onerous surrender penalties and illiquidity. Investors are typically much better off investing directly in low-cost, diversified mutual funds or exchange-traded funds.

The InvestmentNews article notes that many broker-dealers view spVAs as too complex, and that additional training would be required before they would sell it. However, the article also notes that some brokers are selling spVAs "as an alternative to other fixed-income products." spVAs are not comparable to bonds or bond portfolios (just as structured products are not fixed income substitutes, either), and are vastly more complex. It is important that brokers and investors understand these distinctions, especially before entrusting retirement savings to such a risky investment.