Continuing our blog posts and working papers on non-traded REITs, today we report on how investors fared in five non-traded REITs sponsored by affiliates of The Inland Real Estate Group of Companies.1 Inland raised over $18.1 billion from investors in these REITs. Inland's affiliated companies served as conflicted property managers, dealer managers, and business managers (see one of our early blog posts on the interrelated entities involved in Inland American Real Estate Trust).

We gathered data on gross proceeds, distributions, and share redemptions from the REITs' SEC filings, starting from each REIT's registration date, up to the earliest of today or the day the REIT's shares first listed on an exchange.3 We calculate the market value of the common shares at the time each REIT's shares became publicly listed, a merger was announced, or the REIT last reported an NAV per share. We refer to this market value as the value of the REIT upon price discovery (see Table 1 below).

For example, the black line in Figure 1 plots the value of RPAI gross proceeds invested in the Vanguard traded REIT mutual fund. RPAI listed one-fourth of its common shares on the NYSE on April 5, 2012 and its remaining non-traded shares became listed over the following 18 months. RPAI's 194 million postreverse-split shares were worth $1.7 billion (denoted by the orange dot on the figure) on April 5, 2012. The same $4.9 billion invested in diversified, liquid traded REITs would have been worth $7.1 billion. RPAI thus managed to destroy $5.4 billion or 76% of real estate investors' wealth. 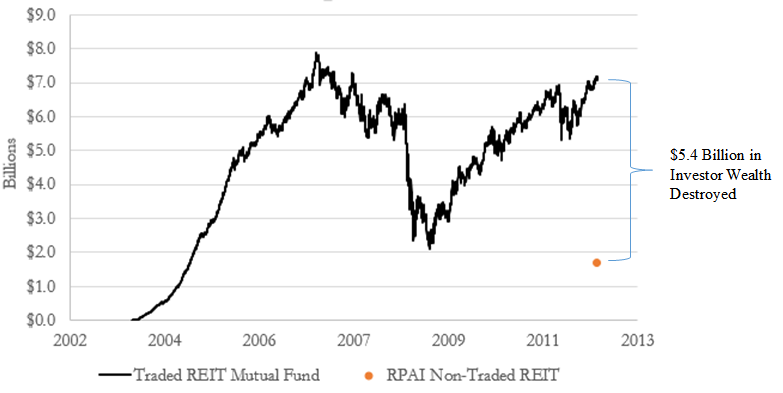 1. There is a sixth Inland non-traded REIT called Inland Real Estate Income Trust that commenced its initial public offering in October 2012 and has not listed, merged with a listed REIT, or provided an updated net asset value per share. We exclude this REIT from our analysis because there is no information on its market price.