Inland American Real Estate Trust, the largest non-traded real estate investment trust (REIT), has been the subject of intense scrutiny. In many ways, the criticism of Inland American has been representative of the issues endemic to non-traded REITs generally, such as poor dividend coverage, conflicts of interest, excessive payments to affiliates, stale or poorly updated share prices, and other issues we have discussed on this blog and in our research work . While these issues have been known for some time, there is still a lot happening in the non-traded REIT space, and with Inland American in particular.

According to the Direct Investments Spectrum, Inland American is still by far the largest non-traded REIT by total assets, with approximately $10.7 billion as of March 31, 2013. The next largest, Cole Credit Property Trust II, had only $7.3 billion, and Columbia Property Trust (formerly known as Wells REIT II) came in third with $5.6 billion.

Like most non-traded REITs, Inland American was originally sold at a fixed share price of $10 per share, even after the real estate collapse of 2007-8. Once FINRA began requiring updated per share net asset values, Inland American reported a value of $8.03, and which has most recently been reported at $6.93. However, this is not necessarily the price investors could obtain for selling their shares, as non-traded REITs are largely illiquid, and share repurchase programs often have restrictions and limits. The most recent tender offer on Inland American shares is for $5.00 per share. 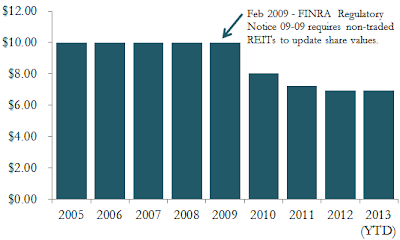 Inland American has been the subject of an SEC investigation since at least May 2012. While the details of that investigation remain unclear, it has been suggested that the SEC is focusing on the disclosure of property valuations and management fees. As we noted previously, Inland American uses a network of affiliated entities to provide services to the non-traded REIT, many of which collect significant fees on new funds raised, real estate operations, or distributions to investors.

Indeed, in March 2013 Inland American was sued by investors over payments to an affiliate, Inland American Business Manager & Advisor Inc.1 The affiliate collected a 5% fee on distributions to investors, and was able to collect $185 million in fees between 2005 and 2012. The suit alleges that those fees were inflated because the 'distributions' to investors were actually return of capital -- a common criticism of non-traded REITs. Even as of the first quarter of 2013, Inland American was paying higher distributions than its modified funds from operations, according to the Direct Investments Spectrum.