Did ARS Interest Payments Adequately Compensate Investors After the Failures?

Auction Rate Securities (ARS) are floating interest rate debt issued primarily by municipalities, mutual funds, and special purpose trusts. ARS were marketed as short-term, cash-equivalent investments similar to commercial paper but any similarities with short-term investments were superficial and misleading. ARS are long-term debt traded in periodic auctions with prices fixed at par. The auction-determined interest rate was constrained by a maximum rate which could prevent the auctions from clearing.

Figure 1 plots the auction clearing rate (in blue) and the maximum allowable rate (in red) on The Gabelli Dividend & Income Trust Series E ARS. Prior to 2008, the clearing rate was always below the maximum rate and the auctions cleared. From early 2008 onward, there was not enough demand for this ARS at coupon rates below the maximum rate and the auctions failed. ARS issuers' typically claim that investors have not suffered damages from the auction failures because the ARS continue to pay a coupon rate which as illustrated in Figure 1 is higher than short-term rates such as the yield on money market funds, the 91-day Treasury bill rate, or the 1-Month LIBOR. 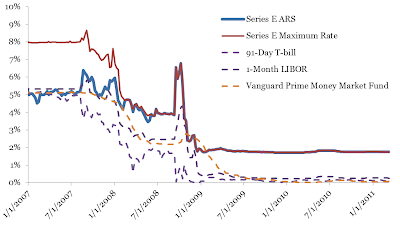 However, unlike the short-term investments used for comparison in Figure 1, ARS are subject to credit risk and liquidity risk. Short term rates such as the 91-Day T-bill rate, the 1-Month LIBOR, and the yield on the Vanguard Prime Money Market Fund are effectively risk-free rates - that is, for all practical purposes, a dollar invested can always be converted back to a dollar in cash at any time. The same cannot be said for ARS. After the auction failures, many ARS have traded only at substantial discounts to par.

A better benchmark for ARS interest payments are the payments made on a security similar to the ARS. The Gabelli Dividend & Income Trust's Series D preferred shares was issued on the same day as the Series E ARS; both are callable perpetual preferred stock. While Series E pays an auction-determined coupon rate, Series D pays a fixed coupon of 6% per year. Figure 2 shows Series E's auction-determined interest rate and maximum rate and the yield-to-maturity on the nearly identical Series D. Series E always paid investors less than Series D and that difference became much greater after the auction failures.

Figure 2 illustrates a common theme we find in our posted ARS paper. ARS auctions failed in early 2008 because the maximum rates declined too far below what investors in truly similar securities were being paid. It didn't take a credit crisis for these auctions to fail. All it took for was LIBOR to drop to levels as low as it had been as recently as 2005. (We have previously posted about ARS in blog posts "Oppenheimer Ordered to Repurchase $5.98 Million in Auction Rate Securities" and "FINRA Investor Alert: Auction Rate Securities").