We have posted a new paper today showing that on July 2007 Banc of America appears to have transferred at least $35 million of previous losses to unsuspecting investors in two of its CLO offerings - LCM VII and Bryn Mawr II. Investors ultimately lost nearly $150 million in October 2008 when these two CLOs backed by leveraged loans were liquidated.

Leveraged loans issued to below investment grade corporations were frequently extended by a syndicate of lenders intending to re-sell participations in the loans to other banks and institutional investors including hedge funds, mutual funds and CLO trusts.

Banc of America bought or financed the $400 million face value portfolio of loans for LCM VII at above par between November 2006 and June 2007.[1] By the time LCM VII was issued on July 31, 2007, the portfolio had already lost 5% and the lowest tranches were nearly worthless before Banc of America Securities sold them to investors. 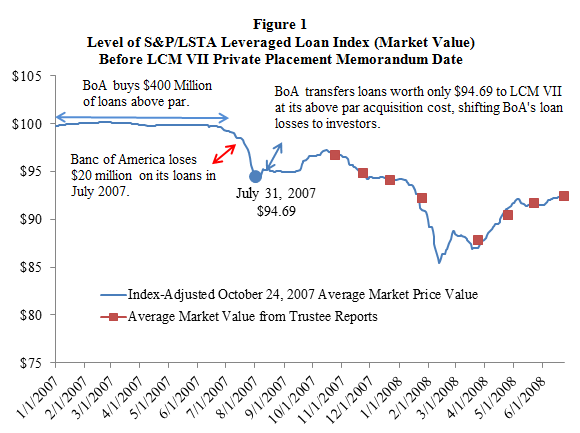 Just like this, Banc of America transferred $20 million in losses suffered on a portfolio of loans it held before the closing to uninformed investors who bought LCM VII's lower priority notes. In addition, since the credit support typically provided by the lower tranches was consumed by undisclosed losses prior to July 31, 2007, investors in the more senior tranches were sold much more risky securities than the offering documents portray and were promised much less compensation than informed investors in those tranches would have demanded.

In October 2008 both LCM VII and Bryn Mawr II failed market value tests and were subsequently liquidated. Investors in the low tranches in each deal lost approximately $75 million. These losses would not have occurred but for Banc of America's failure to inform investors in July 2007 of the losses that had already occurred.

Yesterday, a FINRA arbitration panel in Reno, NV ordered Banc of America Securities to pay an investor who bought the E-1 Notes in LCM VII, $1.375 million including $251,668.74 in interest, $218,344 in attorneys' fees and $23,500 in expert witness fees. The award was made after a hearing in which the Claimant alleged that Respondents violated Nevada's securities fraud statute (NVS 90.570) by failing to disclose that losses in the loans backing the CLO prior to the issuance of the CLO were being transferred to the CLO investors and would make the CLO notes much less valuable and much more risky. Dr. McCann testified on behalf of the Claimant.